Benefit from the new Summer objectives to advance the level. If we are one of the people who think Season 3’s XP progression is moving a tiny bit slower. 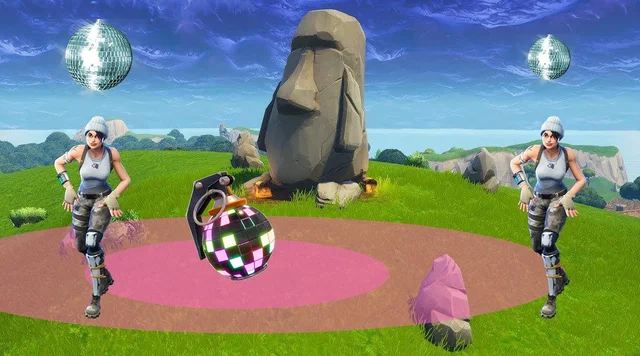 A player is hit with the Boogie Bomb to make them dance. A player cannot build, sprint, crouch, utilise items or weapons while dancing. Both friendly and adversarial players are susceptible to the Boogie Bomb. If a player is injured during this time, they will only dance for about 5 seconds, at most.

Make A Character Dance To A Boogie Bomb Fortnite: Thing We Need To Know About Boogie Bomb:-

These are some things that we need to know in which we can make a character dance to a boogie bomb Fortnite.

#. When a player is a boogie bombed inside a car or other moving object, the bomb compels the victim to exit the vehicle.

#. A player inside a Choppa will jump out from the vehicle and suffer fall damage if a Boogie Bomb is thrown at them.

#. Boogie Bombs can be used to force players out of B.R.U.T.E. or Salvaged B.R.U.T.E.s, making the mechs worthless.

#. After utilizing an item that eliminates fall damage, if one Boogie Bomb is tossed within range of the player, it will reverse the zero-gravity effect, making the player once more susceptible to fall damage.

#. In close combat, the Boogie Bomb should not be used because it will also affect us.

Make A Character Dance To A Boogie Bomb Fortnite: Where We Can Find Boogie Bomb?

In Fortnite, at the bottom, the Rave Cave is where we stand the biggest chance of discovering a Boogie Bomb because there, a Disco is already in full swing. A Boogie Bomb will be ready for us as soon as we search the neighboring chests.

To make things simpler for ourselves, just exit the lobby & join another match if we can’t locate one in this region or it has already been looted. Next, we see how to Make a character dance to a boogie bomb Fortnite below.

Don’t be confused by the word character, Instead of directing us to locate another player, the assignment instructs us to find one of the NPCs that are wandering the map. By choosing the objective from our quest list, we can view the positions of all the characters.

In order to get the NPC to start dancing, locate them in one of the spots and drop a Boogie Bomb on their feet. As soon as we are relatively close to them, a speech bubble will appear above their heads. That Boogie Bomb spawned nearby, and for us, Cryptic had been in Rave Cave. Our Fortnite No Sweat Sponsorship task is now complete, and we have received 15,000 XP.

Make A Character Dance To A Boogie Bomb Fortnite: How To Use The Boogie Bomb?

Because of this, they are incapable of constructing, seeking safety, retaliating, or doing anything else. Every five seconds or if they sustain harm of any type, they will regain their ability to move. Boogie Bomb’s impact used to last a staggering 15 seconds, but Epic Games nerfed this and increased the item’s rarity from Uncommon to Rare because they felt that it was simply too powerful.